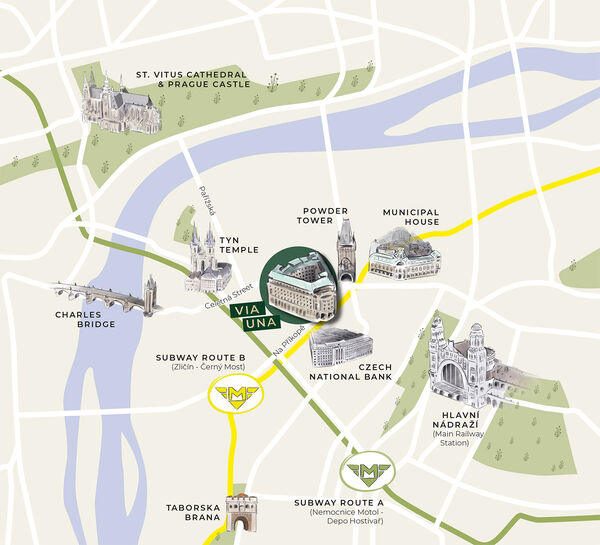 The Jewel of Na Příkopě

The monumental building VIA UNA is located in Na Příkopě, one of the busiest shopping and business areas of Prague. The wide boulevard runs eastward from the bottom of Wenceslas Square and contains some of the most expensive commercial real estate in Prague. VIA UNA also crosses with Celetná Street, which leads from the iconic Charles Bridge to the famous Powder Tower – the projects immediate neighbour. The crossroads created by the two roads is directly in front of VIA UNA and is a popular gathering point for locals and tourists alike, constantly attracting large numbers of people.

VIA UNA is excellently connected to the other city districts. Thanks to the numerous connections by the means of public transportation - the Metro stations Můstek (Subway Route A) and Náměstí Republiky (Subway Route B) are both situated within a short walking distance. Visitors arriving from abroad will also find it easy, as both the main railway station and the airport are within easy reach. Moreover, thanks to the nearby motorway, the project can be easily reached by car.

Motorway D1
The D1 is the oldest and longest motorway in the Czech Republic and easily accessible from VIA UNA.
30 minutes
To Václav Havel Airport Prague.

Wine & Dine
The avenue is lined with restaurants and cafés, suitable for every occasion.
Shopping
The area boasts, among others with countless shops of high-class brands and the popular PALLADIUM shopping mall.